Skip the dip: Timing the Bottom is Overrated

It’s been months but seems like ages since we went through our ‘normal’ daily routines. Zoom (ZM) has become our social network and Amazon (AMZN) is now the shop around the corner. As the modern solutions to our urban lifestyles, many of today’s ubiquitous digital platforms have helped us cling on to what seems to be a past life. Since the lockdowns began, we have witnessed some historical and even unprecedented events. Here are a few of them. IFutures contracts dipped below 0 for the first time ever. This followed a months-long price war started by Russia and Saudi Arabia, whose economies are heavily dependent on petroleum. 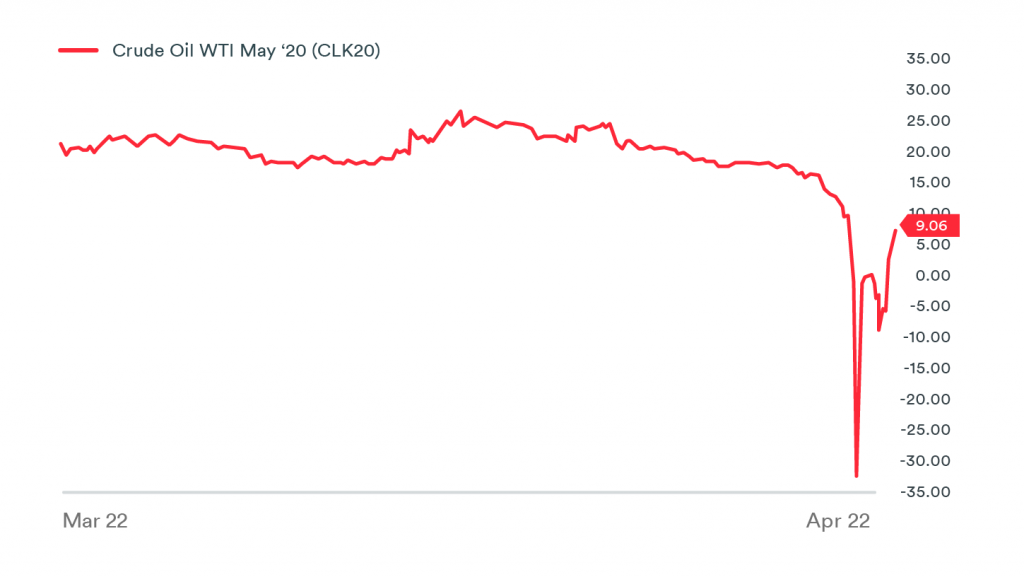 II. Gold/silver ratio reached its historical peak (a hair under 120) in March and currently stands 110.26 (as of May 12th). When the ratio has topped 80, it has signaled a time when silver was underpriced relative to gold. Silver has gone on to rally 40%, 300%, and 400% the last three times this happened2. 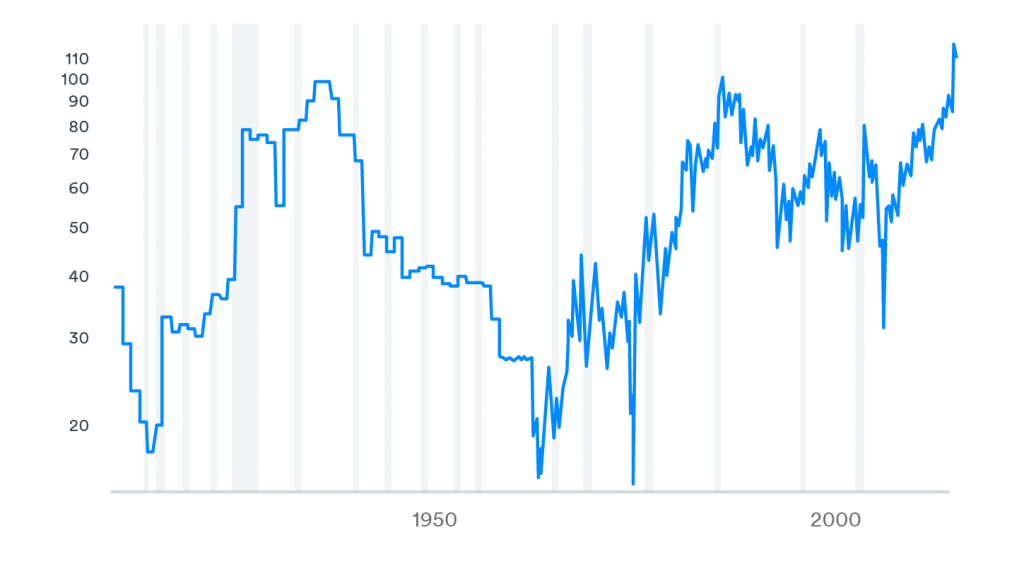 III. Unemployment in the US leaped to 14.7% in April. Last time it was this high? The Great Depression. It took only five weeks for the US economy to erase all the job gains from over the last 11 years. 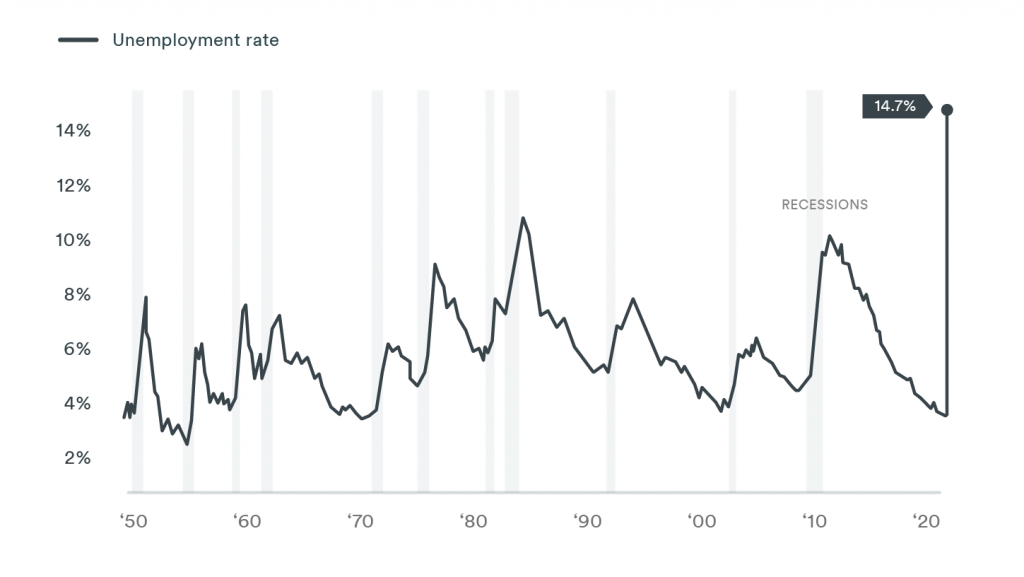 In the meantime, the stock market (S&P 500 Index) continues to recover as it has increased by almost 30% since March 23rd. Feats like this have clouded our thoughts on how well the stock market reflects the health of the economy. But let’s not forget: the stock market is a forward-looking mechanism. Stock prices mirror future expectations of current events, while the ‘economy’ uses historical data to gauge its health at a particular point in time. So as one relies on past data to make a conclusion about where we stand, the other uses it to infer what’s to come. Did we miss the warning signs? Prior to tumbling in March, stock prices were at historical highs. They had not been this overpriced in terms of the cyclically adjusted price-to-earnings (CAPE) ratio since 2007-’08. 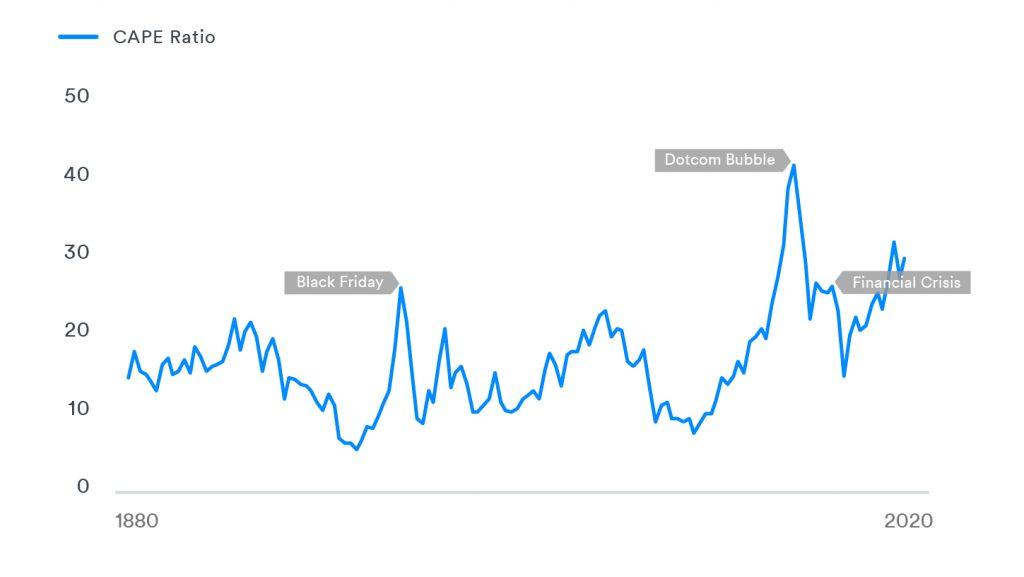 A case could be made that the symptoms were all too obvious. But in the tech-led world that we live in, P/E ratios and book values mean increasingly less as to whether a company is properly valued or not. The current level (as of April 30th, 2020) is 27.27 – still ranking in the top 25th percentile. Don’t fight the Fed. Don’t even stand in its way. Following multiple cuts in March, interest rates have been slashed to 0 and the Fed is using tactics from its crisis playbook. The federal funds rate (what banks charge one another for short-term borrowing) is the lowest it’s been since the financial crisis. Deemed unimaginable by some experts, the US may even consider following in Europe’s footsteps by going to negative rates. For the last few months, the Fed has been pulling out all the stops. The series of relief injections has included programs like the Money Market Fund Liquidity Facility (MMFLF), the Primary Dealer Credit Facility (PDCF), and all the other multi-letter acronyms they have at their disposal. But that’s not all – on May 12th the Fed will begin its program to purchase corporate bond ETFs. The idea is to prop up devastated industries (like airlines, hotels, restaurant chains, etc.) in order to avoid a cataclysmic chain reaction of corporate failures. Seems like the money printer will be going ‘brrr’ indefinitely. As a result, the Fed’s balance sheet has grown by $2.56 trillion since February 26th of this year alone. For reference, the total amount was just $870 billion in 2008. 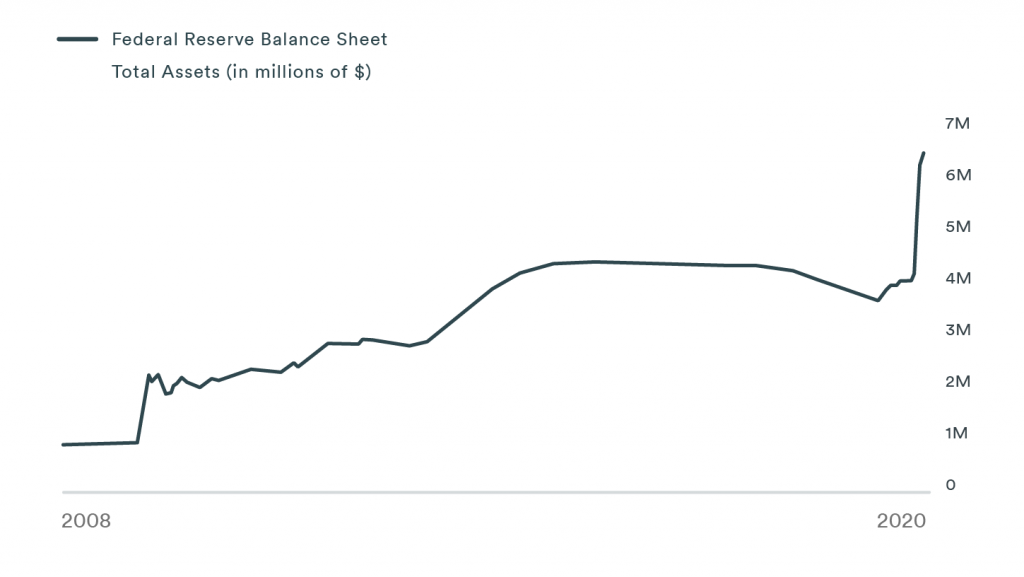 Timing the bottom is overrated. One of the byproducts of the stay-at-home economy is the increased interest in the stock market. According to CNBC, electronic brokers reported trading volumes that are up 100% year over year in Q1 of 2020. There’s a market-wide clearance on equities and investors don’t want to miss out. As people contemplate whether the imminent recovery will be U, V, or W-shaped, most have placed unnecessary importance on ‘buying the dip.’ Thanks to the advent of leveraged exchange-traded products, once investors feel that panic has subsided, they can invest with more conviction. Over time, they may see similar results to those who managed to time the bottom. Let’s assume investor X was eager to take advantage of current trends and decided to invest in Amazon. However, still prudent as to how things may play out, stayed on the sidelines for a few days. Yet the price in the meantime continued to climb. If he/she felt that the trend will continue for the next few days, there are means to compensate for the returns foregone. Let’s have a look at a scenario. 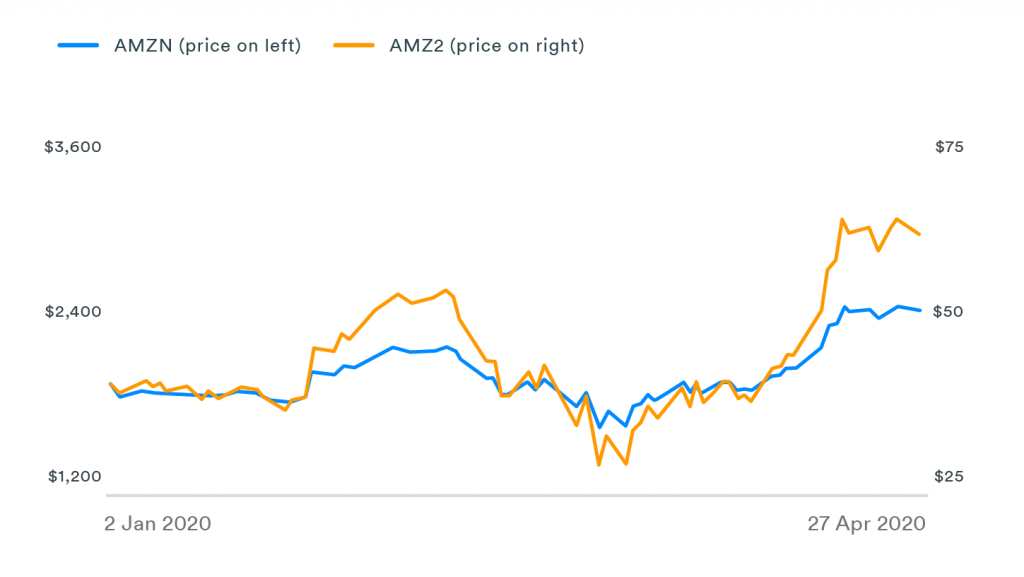 For this comparison, the performance of the Amazon stock (AMZN) vs. the Leverage Shares 2x Amazon ETP’s (AMZ2) daily NAV has been used. On the 3rd of April, let’s assume an investor considers investing in AMZN. While contemplating the decision, the stock rises 7.2% over the following three days. Convinced that the trend will continue, the investor could purchase AMZ2 in order to receive leveraged exposure to the Amazon stock. So let’s see what happens if this same investor had purchased AMZ2 on April 9th and held until the 16th: 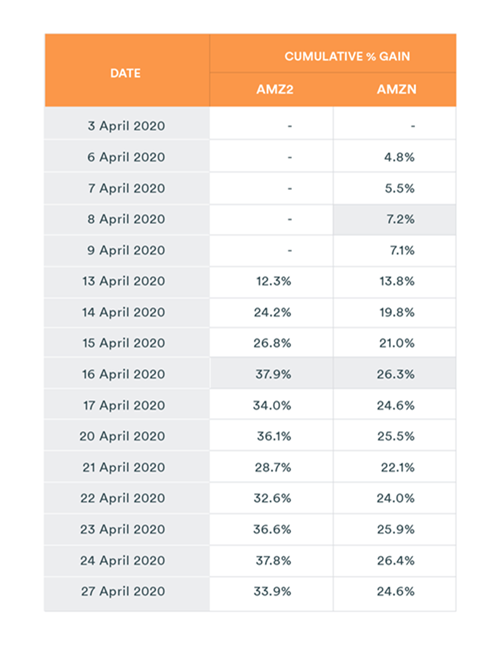 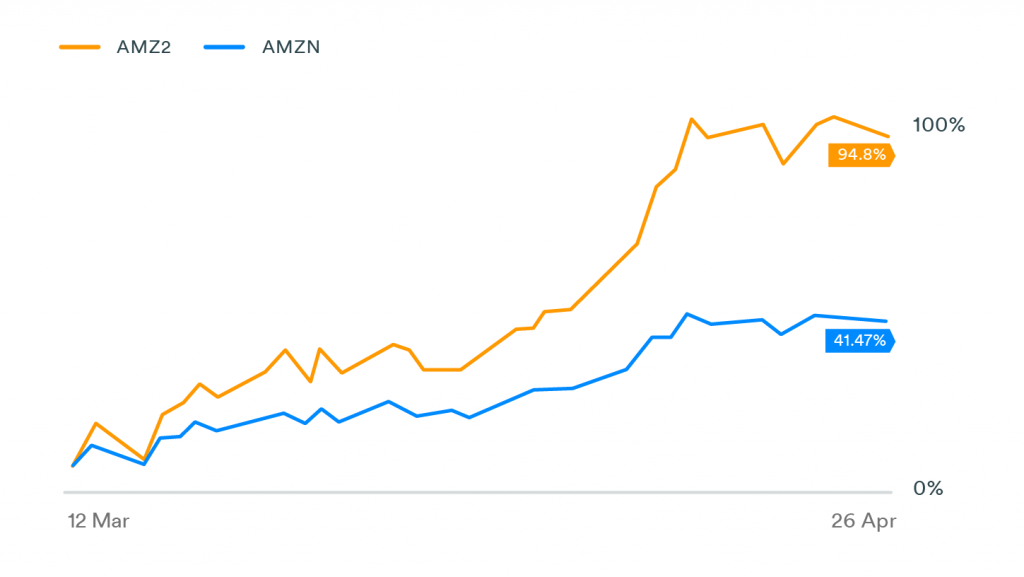 Conclusion That’s the beauty of identifying momentum with leveraged ETPs – due to compounding, consecutive positive gains accumulate very fast. Simply put, while ordinary stocks take the stairs, these products use the elevator. Hence, feeling confident in the direction of the market could be sufficient to replicate, or even outperform, those who actually timed the bottom.

SOURCES
1. Barchart. https://www.barchart.com/futures/quotes/CLK20
2. GoldSilver. https://goldsilver.com/price-charts/gold-silver-ratio/
3. Macrotrends. https://www.macrotrends.net/1441/gold-to-silver-ratio
4. Bankrate. “How the Fed is trying to rescue the economy from the coronavirus with an emergency stash of cash”. https://www.bankrate.com/banking/federal-reserve/fed-trying-to-rescue-economy-from-coronavirus/
Back to Market Insights