Reports from leading market players can sometimes be convergent and often contradictory. Yet with informed decision-making, private investors can construct market-beating sentiments. Single-stock ETPs are purpose-built to give enhanced exposure to headline-making stocks, even if they are often polarising. Here we will examine two stocks – Tesla (NASDAQ: TSLA) and Amazon (NASDAQ: AMZN) – to provide examples on how sentiments can be used to reap substantial benefits using short and leveraged ETPs. Examining the performance of these stocks relative to the Nasdaq-100 Index (NDX) from October 2017 till October 2019 shows widely disparate results. 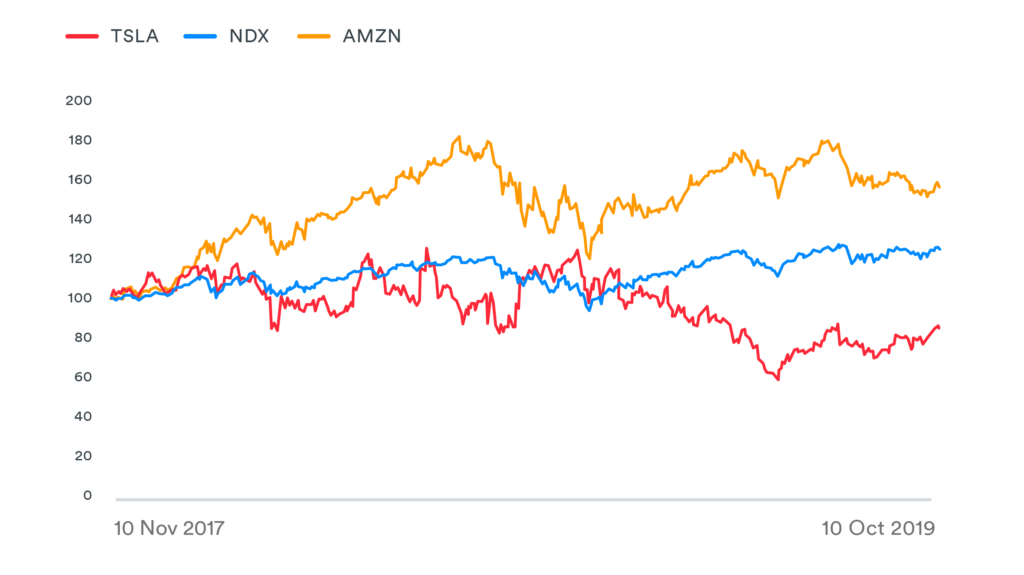 While AMZN shows a larger directional trend relative to NDX than TSLA, one view would be that the former is a more beneficial investment than the latter. A more nuanced look, however, would display opportunities in strategies based on both underlying stocks. Tesla: The Dark Horse Tesla has had a decidedly mixed outlook ever since operations began. In September 2019, some analysts pointed out that the company’s gross margins indicate an upcoming loss. Some others pointed out that the company falling short about 3,000 of selling 100,000 vehicles by the end of the quarter – remaining on par with the previous quarter’s performance – was an additional factor in their bearish outlook on the stock. Many other analysts remained hopeful of gains while the rest adopted a “wait and see” outlook. Following the completion of the Gigafactory in Shanghai (to serve demand in China and nearby Asian countries) and the signing of an agreement with LG Chemicals to supply battery packs to vehicles made there (a break from the company’s traditional partnership with Panasonic), the stock witnessed a dramatic upsurge when it rose nearly 30% in the fourth week of October 2019 alone. Tesla’s Competition Numerous new companies seeking to carve a niche in the EV space have gone public since Tesla began production and rose to prominence. In addition to much-touted Nikola (NASDAQ: NKLA), which has been under a cloud on charges of falsification of data by regulators, a host of China-based EV companies have listed in U.S. exchanges to gain the interest of U.S.-based investors. Chief among them are NIO (NYSE: NIO), Li Auto (NASDAQ: LI) and XPeng (NYSE: XPEV). NIO listed in September 2018 while the latter two were listed in July/August 2020. Stock performance among the EV manufacturers since August 2020 seems to indicate that TSLA is bound for stiff competition in the future. 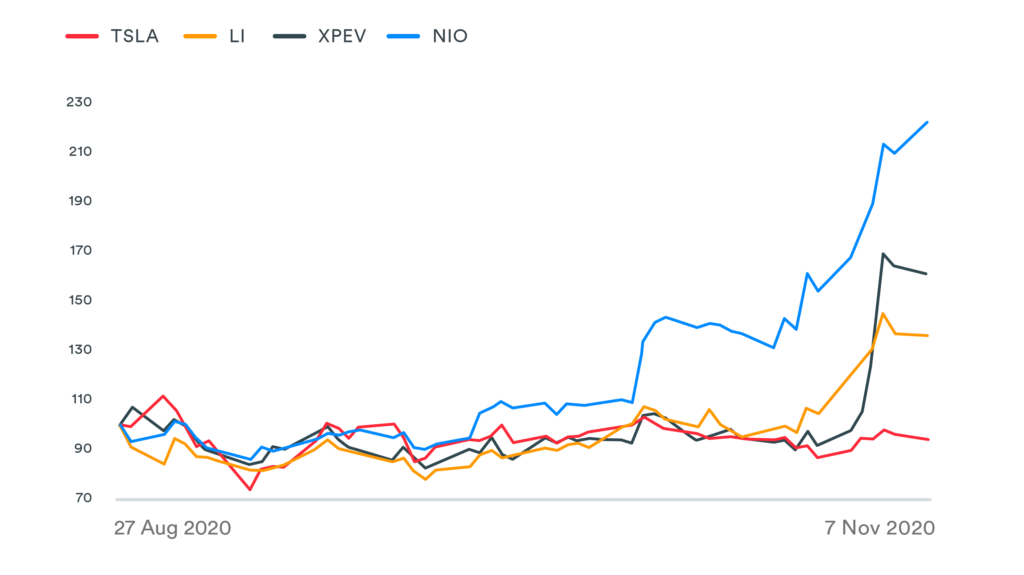 A clear champion in performance – when evaluated from around Q4 2020, data seems to indicate that NIO is the champion of recent history. It certainly is not a slouch in accolades either: with a substantial stable of vehicles in production, ambitious plans for an extensive battery-swapping network in the busiest part of China and a marquee entry in the Formula E racing circuit, it has gone from strong to stronger in a very short period of time. However, a long-term comparison of NIO’s stock performance versus TSLA since the former’s listing is a little more illuminating. 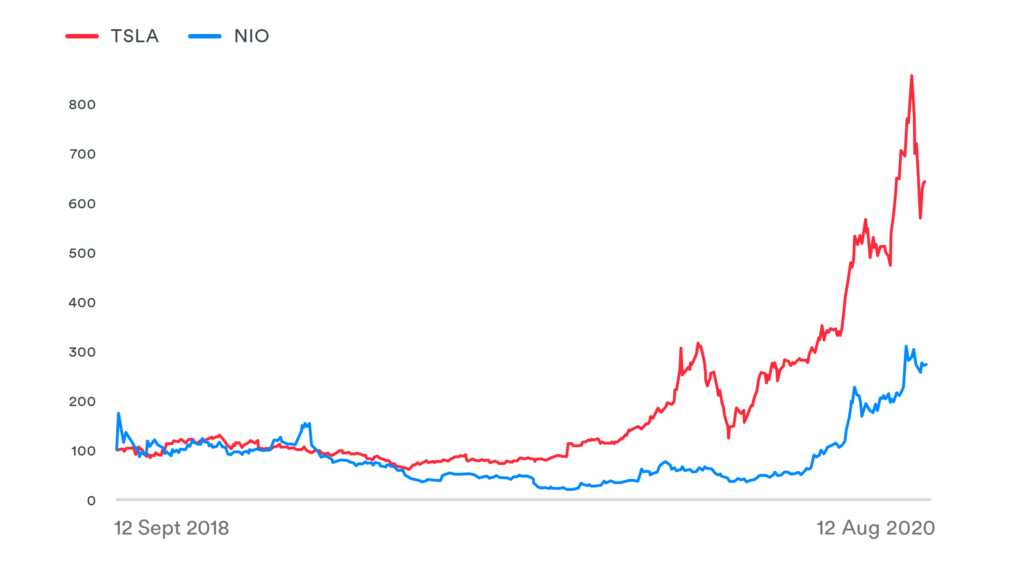 While stock performance seems to trend directionally in more recent years, TSLA has shown clear outperformance up until Q4 2020. In addition, XPeng is under scrutiny in the U.S. justice system due to allegations of intellectual property (IP) theft by Tesla. In a broader context, Chinese companies (and their stocks) are facing greater scrutiny in the U.S. due to allegations of IP theft, ownership structures, questions over actual production numbers, etc. Tesla’s ETP Performance An investor purchasing an ETP based on TSLA with a leverage factor of 2x and holding it in the first two full weeks of Q4 2019, i.e. for 10 trading days from 4th till 15th of November, would have benefitted immensely. 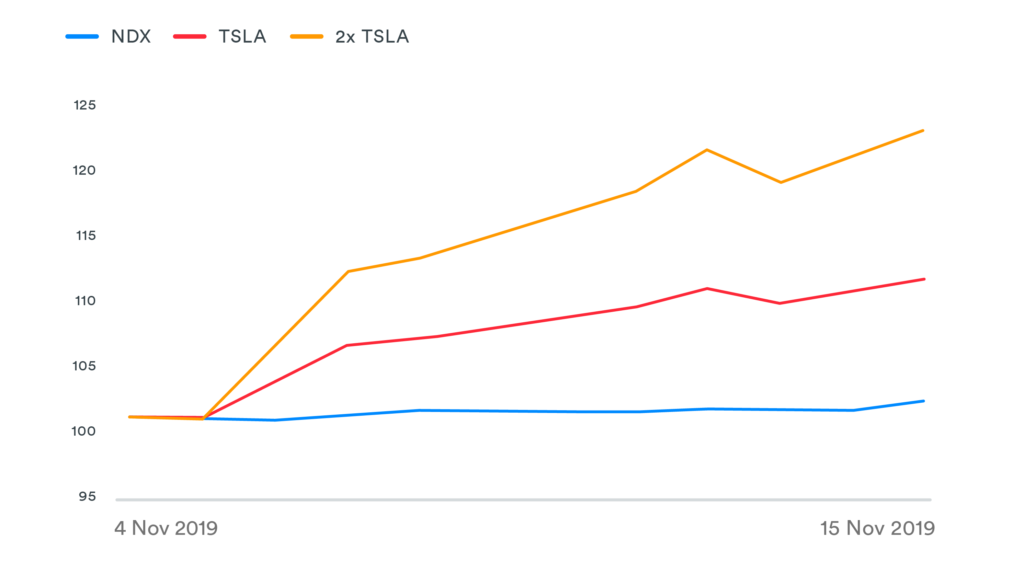 The 2x investment would have yielded a gain of almost 23%, as opposed to gains of 1% and 11% from holding NDX and TSLA, respectively. As covered in our previous article, concerns about over-valuation of leading companies led to a market downturn in the opening weeks of Q4 2020. Being invested in the inverse ETP for TSLA – effectively holding a short position in Tesla stock – may have yielded rich benefits for the shrewd investor. 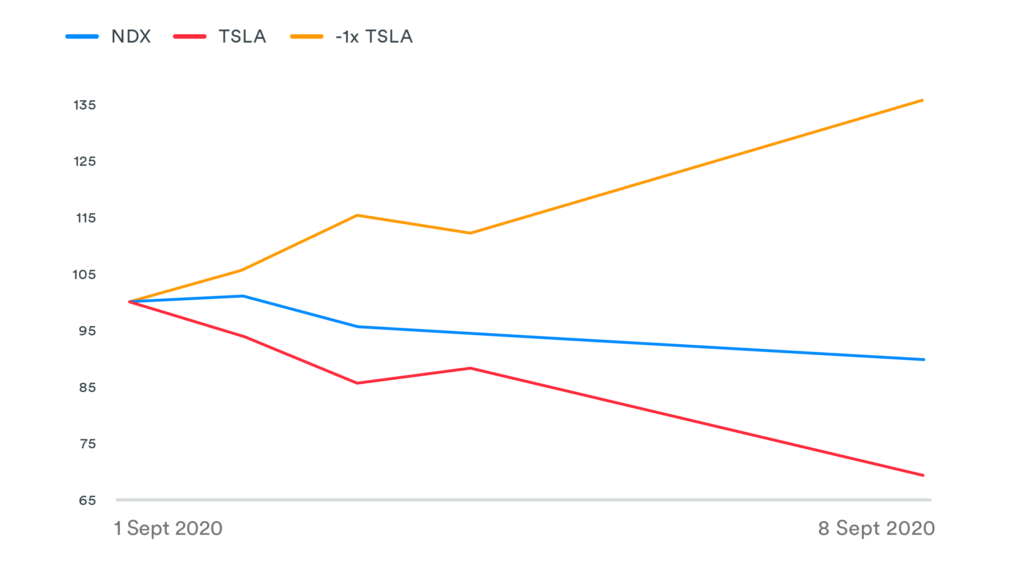 The -1x investment would have yielded gains of almost 36%, as opposed to losses of nearly 10% and 30% from holding NDX and TSLA respectively. Amazon: The Bellwether Amazon – whose performance has long mirrored the trends seen in NDX – was considered by many analysts in the beginning of 2020 to have no more room to grow, owing to its lacklustre fundamentals. The fall of stock markets following the pandemic’s effects worldwide certainly didn’t help matters. The stock collapsed in line with NDX until the bottom on March 23rd of this year. Following this, the leading companies constituting NDX began to improve their performance as the global economy adjusted to current conditions. The market rose nearly 9% in the week following the 23rd while AMZN rose only 2%. However, it was then reported that millions of people in the U.S. and abroad had to turn to online marketplaces to fulfil their essential requirements like groceries, food, toiletries, and medicines in the face of lockdown measures, shortages at local stores due to panic buying, etc. At a time when companies were cutting pays and jobs, AMZN went on to hire more and more staff, eventually leading to the hiring of 100,000 warehouse and delivery workers. Amazon’s Competition Amazon controls 45% of the U.S. electronic marketplace share alone which is expected to grow to 50% by 2021. Its closest competitor isn’t a website but the “big-box” department store Walmart (NYSE: WMT) which has witnessed a 40% year-on-year growth and is the second-most visited website for online sales. Walmart also owns 77% of Flipkart, India’s largest online retailer with over 100 million registered users. eBay (NASDAQ: EBAY), which was the pioneer in consumer-to-consumer (C2C) online selling, has been evolving into a business-to-consumer (B2C) selling space as well. In terms of marketplace website visits, it stands second to Amazon with nearly 20% of market share. Alibaba (NYSE: BABA) specializes in wholesale selling online and went on to diversify into B2C, C2C and multinational brand sales under distinctive businesses. Today, Alibaba’s various businesses account for nearly 58% of all online retail sales in China. Rakuten (OTC: RKUNY) holds nearly 10% of the electronic marketplace share in Japan and has been making acquisitions in France, U.K. and the U.S. In addition, with retail e-commerce sales expected to reach nearly $5 trillion in 2021, there are nearly 24 million stores selling products online today. Competition is increasingly specializing along product categories, which suggests that further consolidation of online marketplaces would be a tough preposition. A 3-year comparison of these USD-denominated instruments reveals that competition is clearly among two companies in the near future. 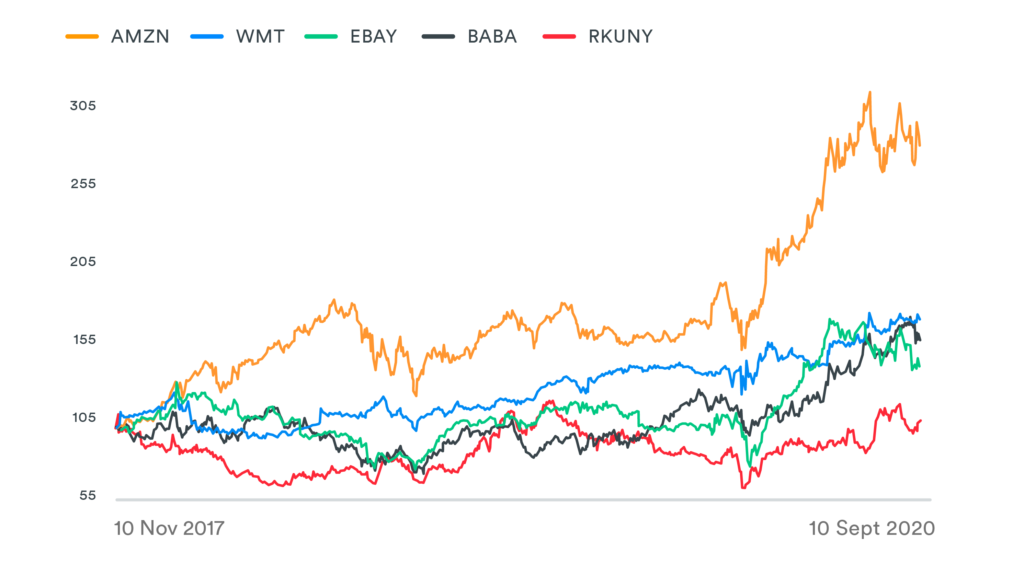 While EBAY has shown a surge in performance since the pandemic broke out, directional trends over the past 3 years are greatest between AMZN and WMT. Furthermore, AMZN clearly leads the pack in this category. However, this space is bound to get more interesting in the future as WMT catches up and any other innovations that EBAY can bring to bear. Amazon’s ETP Performance An investor purchasing an ETP based on AMZN with a leverage factor of 2x or 3x and holding it in the first two weeks of Q2 2020, i.e. for 10 trading days from 1st till 15th of April, would have benefitted immensely. 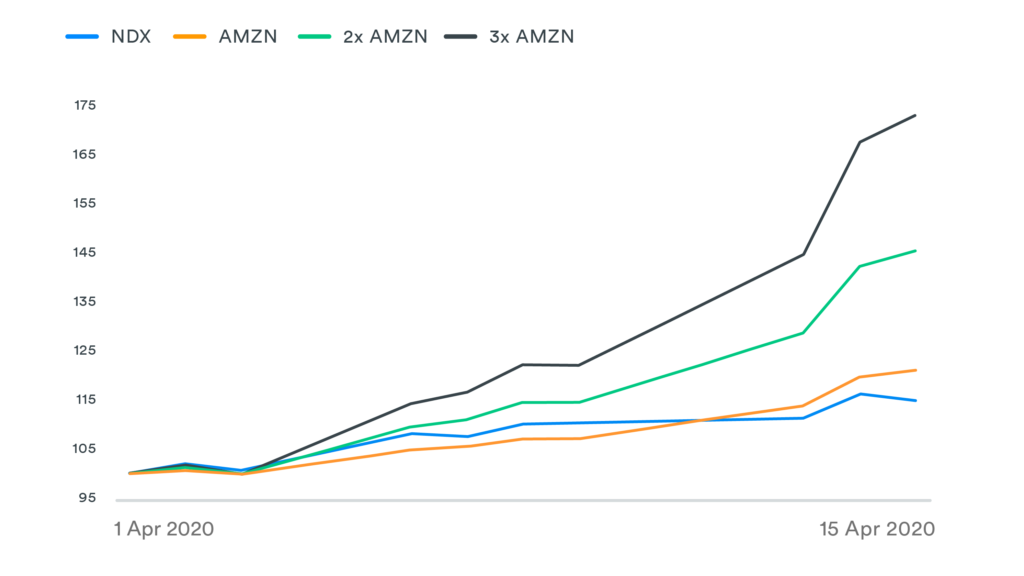 The 2x and 3x investments would have yielded gains of almost 45% and 72% respectively, as opposed to gains of 15% and 21% from holding NDX and AMZN respectively. AMZN’s status as a bellwether of the index truly comes to light during the predicted and expected downturn of Q4 2020. Being invested in the inverse ETP for AMZN yields typical benefits that the shrewd investor would have seen in previous market cycles. 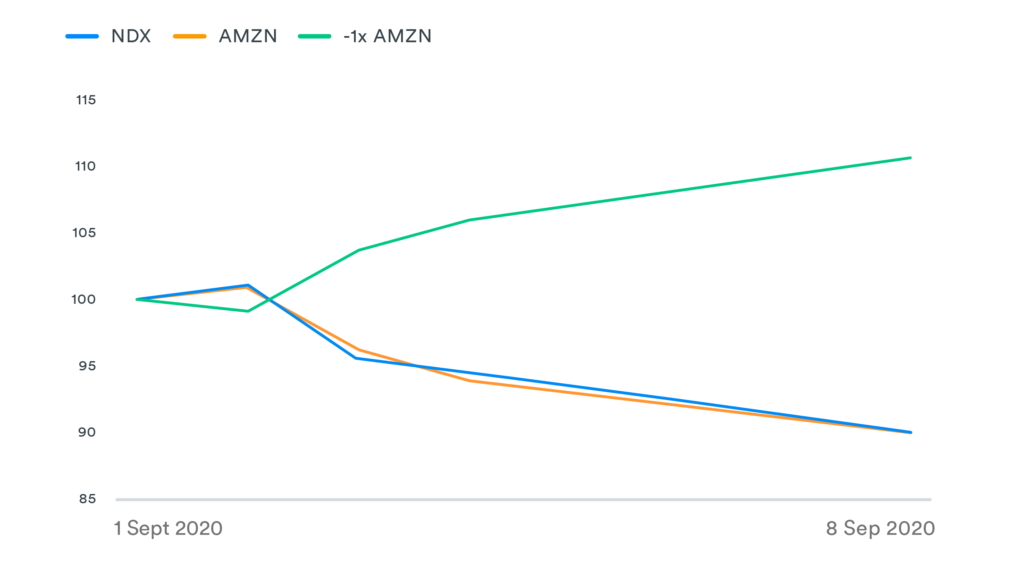 The -1x investment would have yielded gains of almost 11%, as opposed to losses of nearly 10% from holding NDX and AMZN. In Conclusion As in our article about capitalizing on market negativity, we reiterate that the scenarios depicted show a trend extending over several days. However, in practice, it is not unusual to see a trend that lasts only a day or two. Key takeaways: Be it a dark horse or a bellwether, an investor with an intuitive understanding of real-world dynamics is well-positioned to enhance their strategies using Leverage Shares ETPs. Listed in three currencies, the ETPs allow investors to voice their convictions through the familiarity and convenience of a share dealing account.
Back to Market Insights