Leverage Shares’ range of single-stock ETPs (Exchange Traded Products) has brought heavily traded US stocks within the reach of European investors. Yet some investors may still have questions regarding the price movements of ETPs that track stocks in a different time zone. The answers lie in the pre-market and after-hours trading provisions in US exchanges, such as the NYSE and Nasdaq. Implemented through electronic communication networks (ECNs), they help address the increased demand for trading worldwide. Extended Trading Explained While US stock exchanges are open from 14:30 to 21:00 GMT (UK time), pre-market trading starts as early as 9:00 GMT and runs until markets officially open. After-hours trading then picks up where normal hours left off and continues until 1:00 GMT. 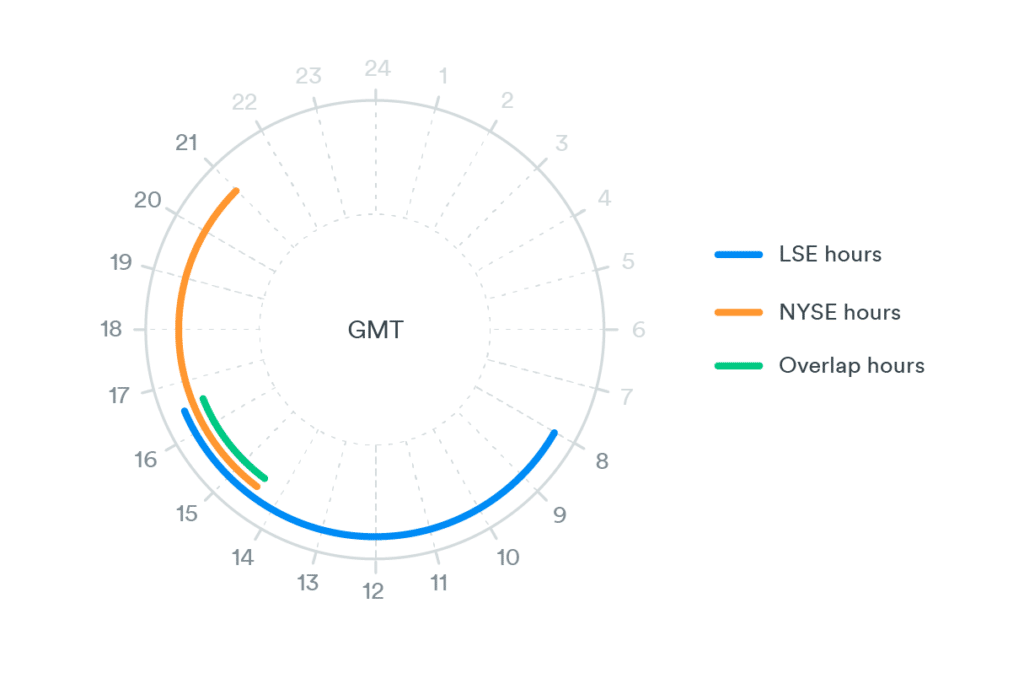 Both after-hours and pre-trading sessions are characterized by low volume and low liquidity, which lead to much wider bid-ask spreads than seen during “regular” trading hours. “Spreads” here denote the ranges of prices at which offers are made to sell and buy stocks. This is problematic since there could be a vast difference between what sellers and buyers are quoting. Hence, most brokers require traders to enter only limit orders during these extended trading sessions. “Limit orders” are trades committing to purchase or sell a security at a specified price or better. Typically, heavily-traded stocks and those with the largest market capitalization see some positioning take place at or around 9:00 GMT. All things considered, trading via ECNs begins at 9:00 GMT and ends at 1:00 GMT, i.e. an hour after midnight GMT. ETPs and GDRs Given these extended hours, international market makers have been able to quote spreads even after US markets are closed. This is made possible by Global Depositary Receipts (GDRs). GDRs are certificates that represent a particular number of shares in a US company and are sold through foreign brokers. GDRs provide indirect access to major US stocks – with the added convenience of an investor’s local broker and being denominated in local currency. By definition, the GDR should track the price of the underlying stock – otherwise, there would be arbitrage opportunities. So how can an investor ensure that Leverage Shares ETPs move in tandem with the US stocks they aim to track? As many brokers are beginning to offer pre-market/after-hours trading to their clients, investors can now get both magnified and inverse exposures to leading US stocks even before NYSE or Nasdaq open. There are three important aspects that influence both GDR and – by extension – ETP price/performance:

Let’s consider an ETP denominated in EUR that is based on a U.S. stock denoted in USD. The FX rate for consideration is the EUR/USD. Since the GDR is denominated in EUR and the underlying stock is in USD, the FX rate would influence the GDR’s quoted price as well as the ETP, without necessarily implying failing ‘lockstep’ behaviour. FX is traded in a different marketplace and the effects of currency fluctuations are not always immediately applied on GDRs until a sort of ‘consensus’ is arrived on an FX rate, which also continually flows, ebbs and moves throughout the day. FX trading – unlike stocks, GDRs and ETPs – is conducted electronically over-the-counter (OTC) via computer networks between traders situated all over the world. The market is open 24 hours a day, five and a half days a week and averages over $5 trillion in volume every day. News events regarding the underlying company that surface after US “regular” trading hours would have an effect on the GDR. Typically, companies are strategic about how and when they announce important information. Announcements during “regular” trading sessions could cause a large knee-jerk reaction that misrepresents the true value of the company stock. Many economic indicators are released by government agencies and think tanks about an hour before trading begins in New York. Market reaction to these indicators can often set the tone for the trading day. The most significant indicator would be the jobs report issued by the US Bureau of Labor Statistics on the first Friday of every month.

Empirical Example Below is an example of a Leverage Shares 3x Apple ETP (LON: AAP3), its corresponding GDR (FRA: APC), and the US stock (NASDAQ: AAPL) in action. 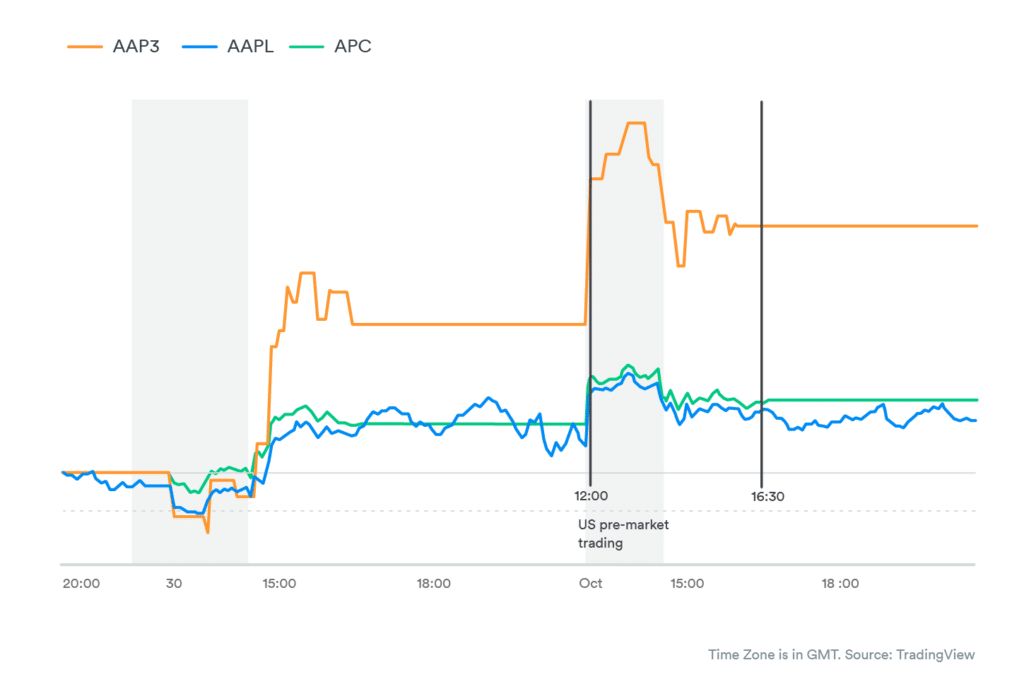 It can be seen that the GDR and the underlying US stock move in lockstep both during pre-market trading in the US and during overlapping ‘normal’ market hours – which run from 14:30 GMT until 16:30 GMT. The leveraged ETP amplifies the movements of the GDR – thus, preforming as expected. The time difference means that the daily performance between the official close and open price of the US stock may not exactly equal that of the ETP multiplied by the leverage factor. A better gauge would be to compare the daily performance of the ETP versus the GDR instead. With that said, lengthier time frames prove that the ETPs do move in unison with the underlying stock. Let’s examine the one-month movements of the three to see just how well the ETP has tracked both the underlying stock and its corresponding GDR. The three instruments’ movements, when graphed, show strong lockstep behaviour across a recent 1-month period. 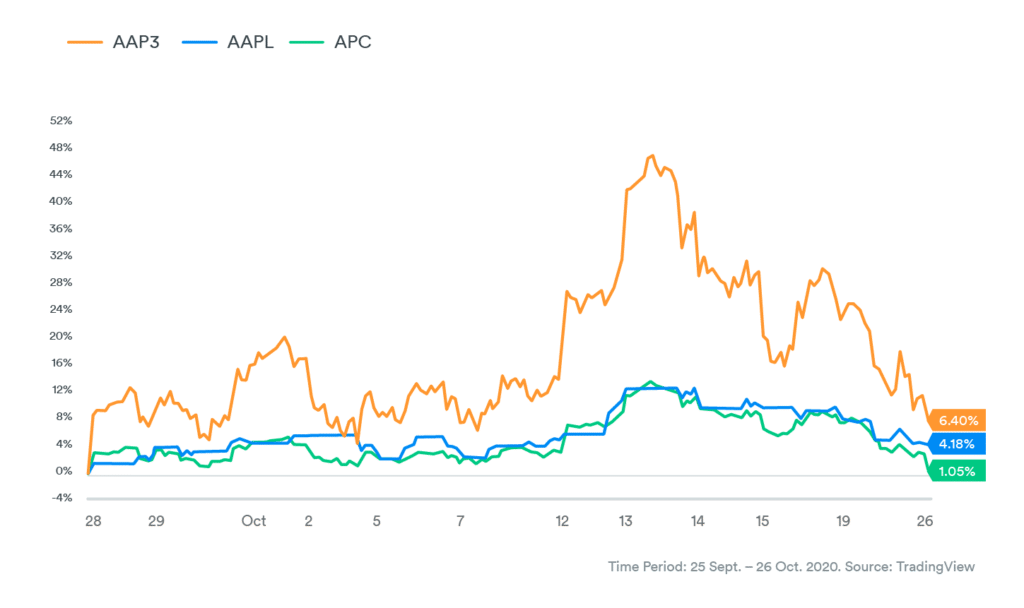 It can be seen that the AAP3 (ETP) magnifies the trend seen in APC (GDR) which, in turn, adjusts in accordance to that of AAPL (U.S. stock) every time the U.S. market open and when there are overlapping hours in both AAPL and APC’s markets. Some of the difference in the performance of the GDR and the underlying US stock is attributable to shifting FX rates (as AAPL is denominated in USD while APC is in EUR). It also bears noting that market makers determine the prices of the products offered by Leverage Shares. These companies don’t offer bid/ask spreads outside of LSE hours. Summary Since Leverage Shares ETPs begin trading on the London Stock Exchange long before US markets open, its price primarily depends on: The bottom line is that when it comes to the complexity of capturing the momentum of leading U.S. stocks, European investors now have a wider toolkit than ever before. Leverage Shares ETPs allow traders to express their convictions on US stocks, both to the upside and downside, even before US markets open for trading.
Back to all articles

Skip the dip: Timing the Bottom is Overrated